Something happened to me when I had a baby. I’ve always been very strong-willed, demanded equality for women and am quick to counteract ‘banter’ but this determination and passion has evolved somewhat. I’ve become more aware of the gender stereotypes enforced on children and how women are treated differently as they get older; regardless of whether you’re a working mum, stay-at-home mum, choose not to have children, put your career first, put your family first – everyone has an opinion and you can’t do right for doing wrong. Well, I say fuck that! It’s time that we empower women to make the right choices for them and also provide children with positive female role models. 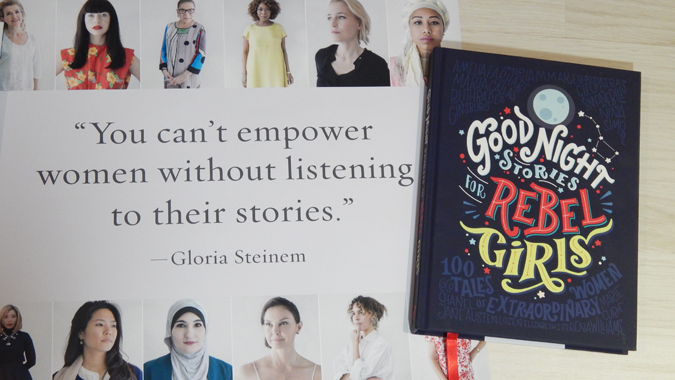 Education focuses on so many successful (and unsuccessful!) men and it wasn’t until I read some of the books featured in this post that I realised just how many bad-ass women there are/were that history lessons simply (and unjustly) neglect. Thankfully, there are plenty of writers, illustrators and publishers looking to correct that. Here are a few of my recommendations. 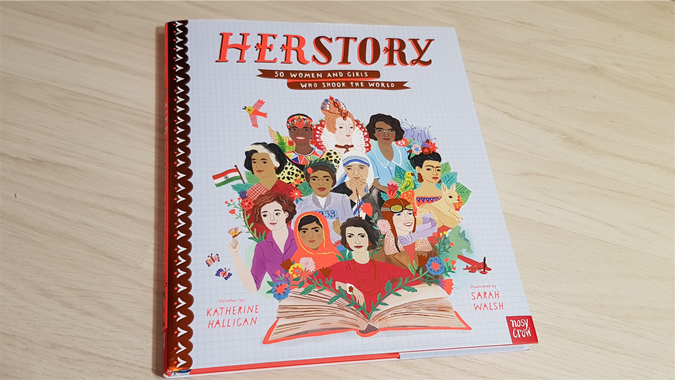 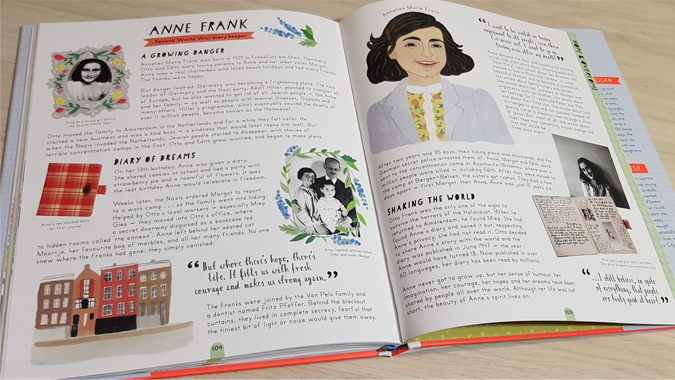 HerStory* is a stunner of a book, featuring the lives of inspiring women. A must-read for young women everywhere, it’s packed full of ass-kicking female role models. This encyclopaedia of girl power features everyone from Mother Theresa to Malala, and includes the likes of Emmeline Pankhurst, Anne Frank, Frida Kahlo and Marie Curie. It’s split into categories titled Believe & Lead, Imagine & Create, Help & Heal, Think & Solve and Hope & Overcome, encouraging girls of all abilities and interests. Unlike most educational books, HerStory is so beautifully presented that you can’t help but fall for its charm and find yourself instantly engrossed. 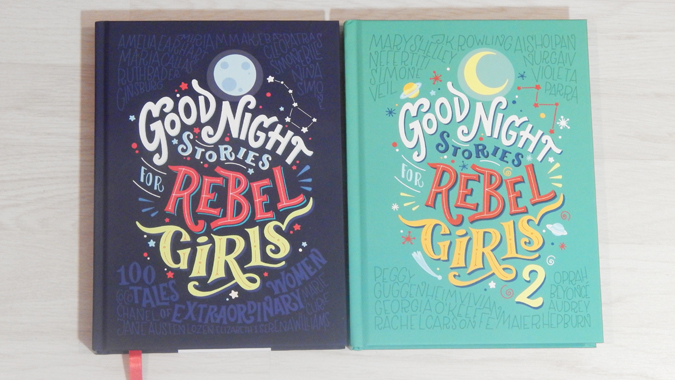 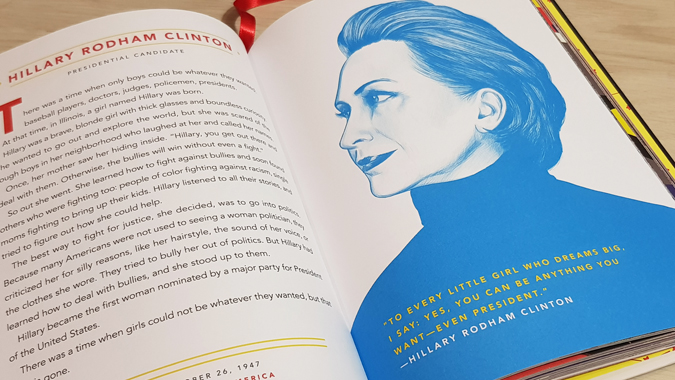 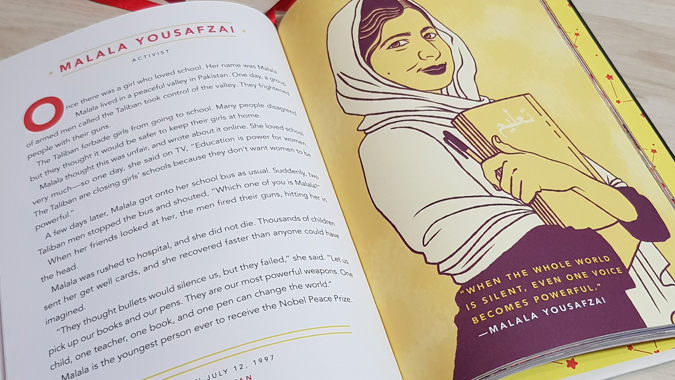 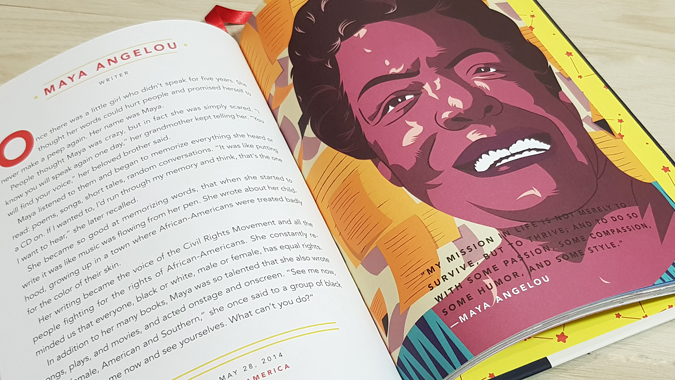 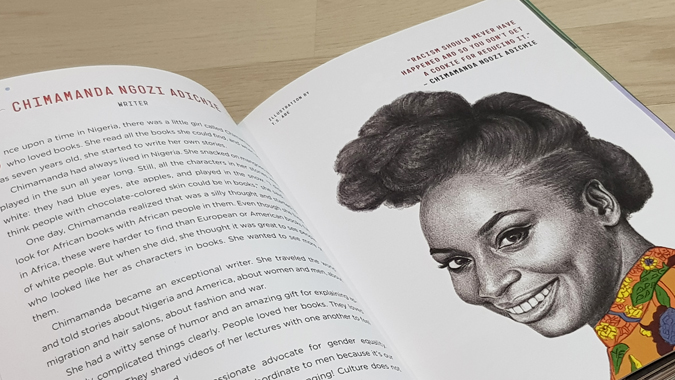 Women have been making names for themselves in the world of science, anthropology, literature and politics for centuries and now, thanks to the team behind Good Night Stories for Rebel Girls*, mini rebel girls can learn about hundreds of women who have made a difference in the world. Women who literally fought for what they believed in. Women who paved the way for future generations. Women who never gave up. The illustrations are stunning and the stories are a simple one-page outline of the women’s lives but it’s enough to convey the impact they’ve had. The first volume is packed with one hundred stories of incredible women from a variety of backgrounds. They’re from all over the world and across the ages, featuring ancient leaders, classic literary writers, modern politicians and young sporting talents. Of course there are more than one hundred women who have helped shape history and led the way in the world of culture, sport, medicine and business, so there’s a second volume*. Bring on the next one! 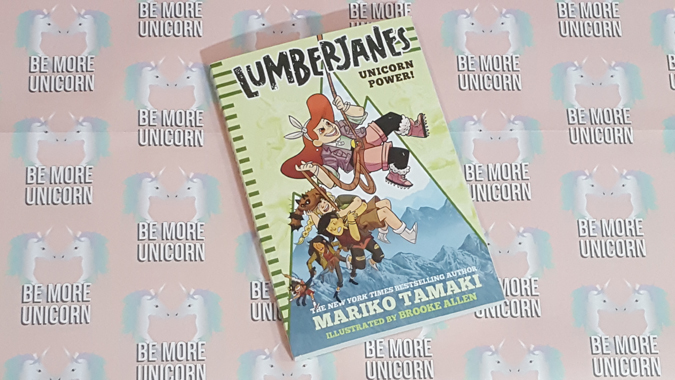 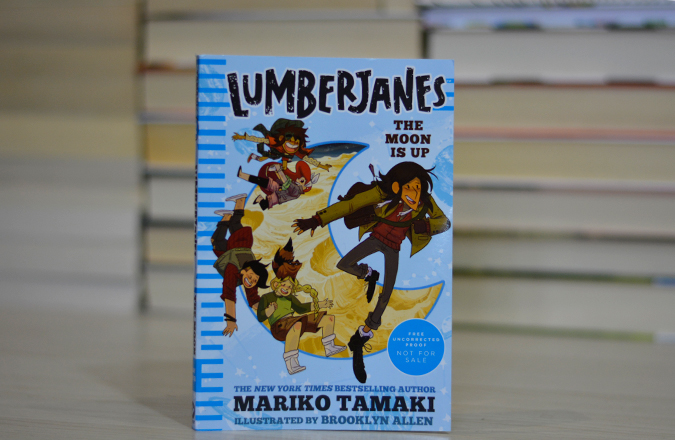 Lumberjanes: Unicorn Power!* is the ultimate modern feminist adventure story. A novel adaptation of the popular comic books, it features some truly bad-ass female characters. It also casually throws in such terms as ‘herstory’ and ‘goddess’, plus a character with two dads and another who prefers the ‘they’ pronoun. It’s inclusive without being in your face about it; there are no token character types here. The artwork in this novelisation has been produced by Brooklyn Allen, the original illustrator of the Lumberjanes series, so it feels true to form and you get a strong sense of the comics. Lumberjanes is a genuinely inspiring read and it’s full of motivational quotes. Hell, I want to go to Miss Qiunzella Thiskwin Penniquiqul Thistle Crumpet’s Camp for Hardcore Lady-Types. Also check out Lumberjanes: The Moon is Up*. 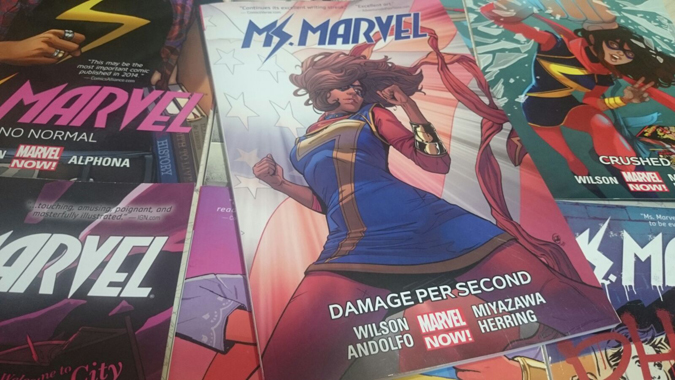 Ever feel like you just can’t relate to superheroes? Beyond the special powers and all that, they still feel completely unrealistic. Enter Ms Marvel. She’s just a typical Muslim high school girl, when she’s not being totally bad-ass. She’s the hero we all need. The first eight volumes are available now and volume nine is released on 31 July – I really need to pre-order mine. 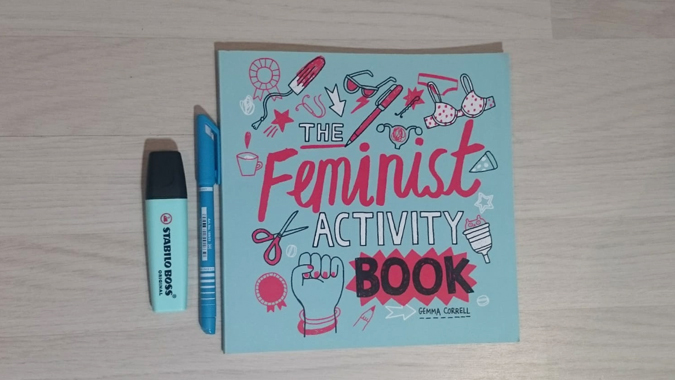 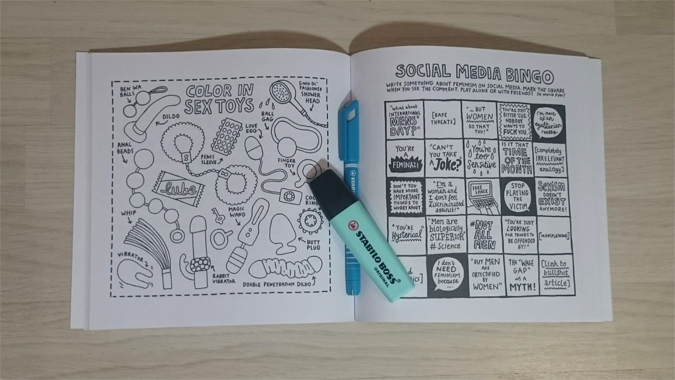 Gemma Correll’s Feminist Activity Book is a brilliant alternative to the typical adult activity books, packed full of pages to encourage you to doodle, track your reading, colour… hell, there’s even a bingo game! 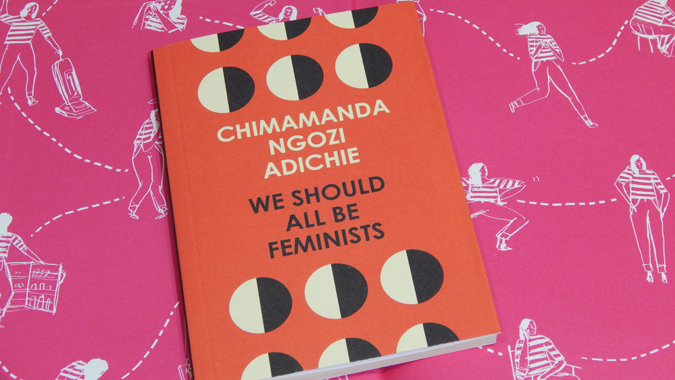 I genuinely wish I could afford to buy a copy of We Should All Be Feminists for everyone I know. Despite having been an out and proud feminist for about 20 years before watching Chimamanda Ngozi Adichie’s TED Talk, it genuinely changed my life. It made me want to be more active in changing people’s perception of feminism – and how we should be treated. 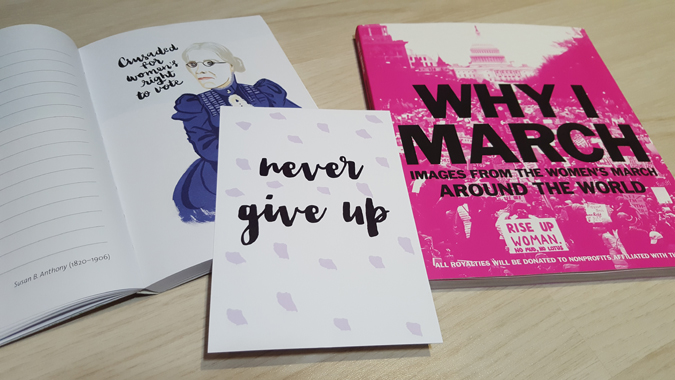 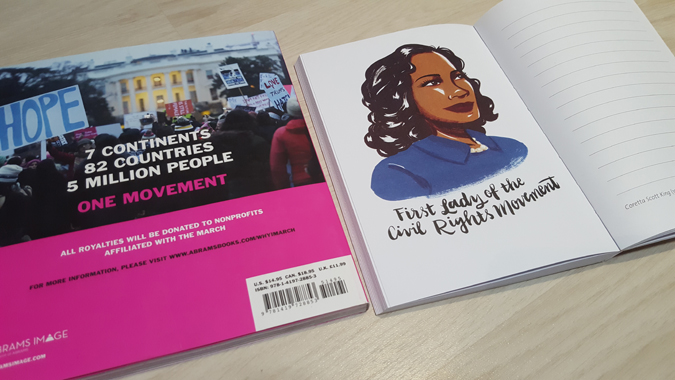 Young women have one of the lowest voter turnouts and it’s not hard to see why. For the longest time I thought politics didn’t matter to me because I didn’t understand it. But it’s all around us. It affects all of our day-to-day lives. In fact, I think last year (and Trump!) has shown just how involved women are becoming in politics. The hundreds of international Women’s Marches featured in Why I March* had fantastic turnouts and made global news. Women of all ages were marching for what they believe in. Not all that long ago women died so that we could have a voice; so we could vote. Isn’t it time the government started catering to women’s issues? Isn’t it time we made them listen? 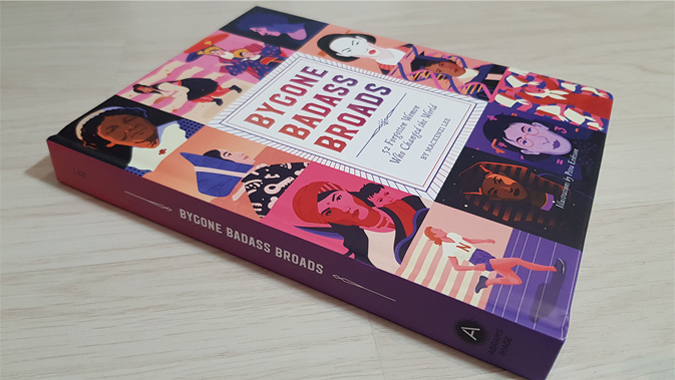 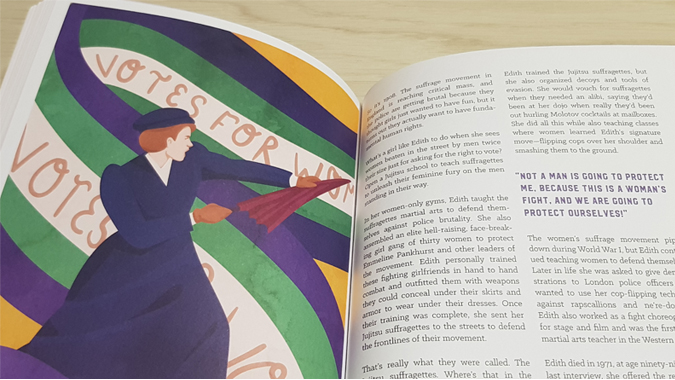 Bygone Badass Broads* by Mackenzi Lee and Petra Eriksson is based on Mackenzi’s popular Twitter series of the same name. The book features 52 truly badass women throughout history, featuring soldiers, writers, activists and athletes who you probably haven’t heard of before. In fact, I only recognised one name: Dorothy Arzner (my dissertation was on female directors). Bygone Badass Broads is a Good Night Stories for Rebel Women – a hilarious, inspiring and insightful account of the lives of women who really should be spoken about more. 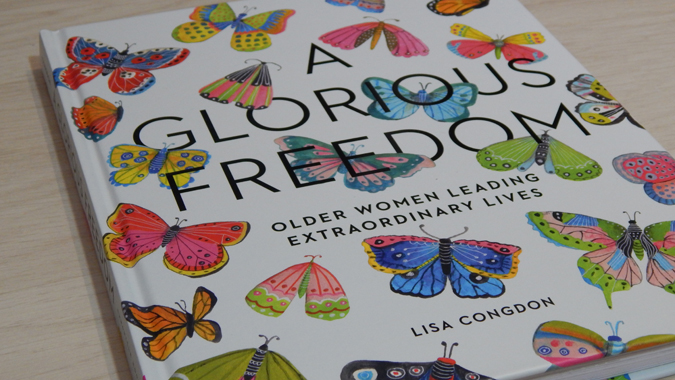 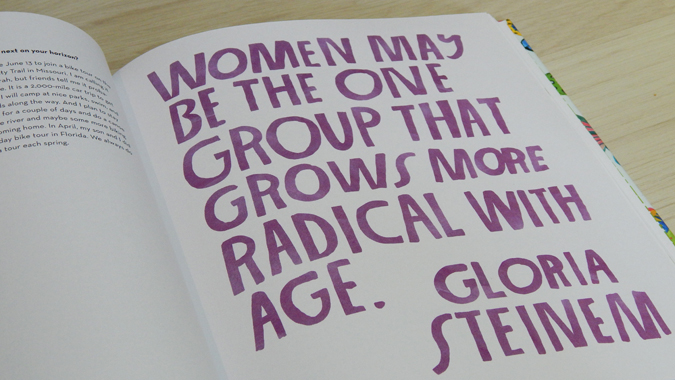 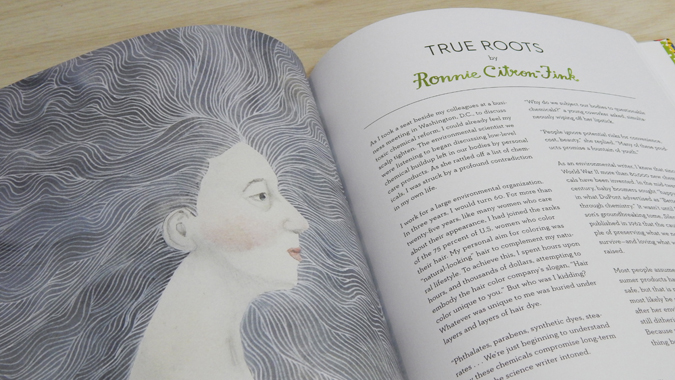 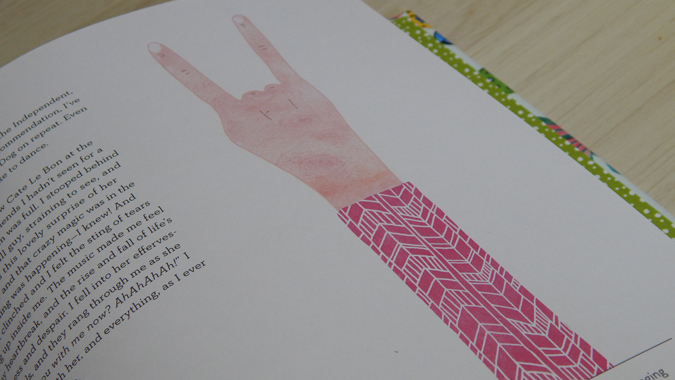 A Glorious Freedom* by Lisa Congdon is a stunning collection of profiles, interviews and essays by older women who know what it’s like to grow old gracefully, graciously and to stick their middle finger up to society’s norms and stereotypes while they’re at it. It features so many inspiring stories, including women who found their passion late in life, embracing being single in your forties, going au natural and even a woman who became the highest ranked female judo master in the world at 98! It’s a much-needed reminder that, actually, you can do anything. You’ve just gotta have a bit of patience, determination and a whole load of passion. If this is what it means to grow older, to feel confident, empowered and give less fucks, then bring it on!

Which one will you be starting with?

*All of these books are previous review copies but I genuinely love them all and look for any opportunity to share them again!

2 thoughts on “Books for feminists of all ages”